Yesterday and today I had the misfortune of driving through Edinburgh. Don’t get me wrong, as a born and bred Edinburgh boy, I love the City, but the mess that the City of Edinburgh Council are making of the roads situation drives me to despair.
Firstly the condition of the roads. If they aren’t potholed then they’ve been badly patched and have lumps of tarmac crudely slapped into the holes meaning it’s like driving over small speed bumps.
Then there’s the roadworks. I drove down Leith Walk. There are 3 sets of temporary traffic lights within half a mile of road. Three sets within half a mile. 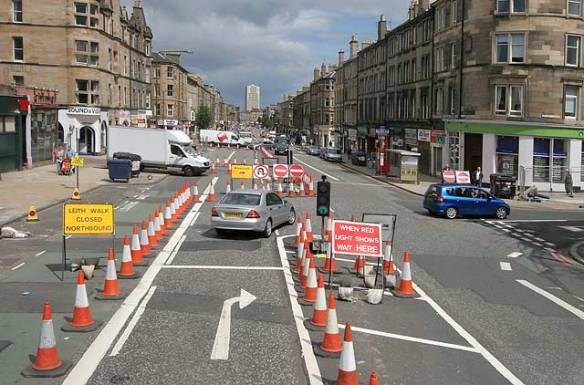 Do any of the facilities companies actually speak with one another, or do different Council departments deal with the roads but not with each other as there seems to be a distinct lack of joined up thinking.
And then there’s the piece de resistance, THE 20MPH LIMITS.

Who on God’s earth thought that this was a good idea?
Traffic now moves as if in a funeral cortege. Pedestrians now think they can amble across the road wherever they like as the cars are perceived to be moving so slowly. Twice I saw pedestrians having to run across the road as they misjudged the speed of cars.
I was overtaken by several vans, a Police car and umpteen cyclists, so the new limits clearly don’t apply to everyone.
This is probably the straw that’s broken the camel’s back for me and what used to be, MY CITY.
I shall consciously avoid travelling to or through Edinburgh if at all possible, and how many people will do likewise? How much of a drop in footfall will it take before retailers put pressure on the Council to scrap the latest in their long line of anti-car policies?
IMHO it all started with David Begg in the 90’s who was Transport Convenor at the City of Edinburgh Council. He dreamed up several crackpot schemes that ostracised car drivers and made journeys through our Capital city a nightmare. He was cited as a “leading authority on transportation”, and as proof that you CAN fool some of the people some of the time, he advised Tony Blair’s government on road transport issues. Oh really? So your claim to be a transport genius is based on your record of screwing up travel in Edinburgh?
He’s been followed by several other bams who thought they were the answer to the City’s travel problems including Andrew Burns and now Lesley Hinds. Each of whom brought different ideas to the table. Remember Andrew Burns’ innovative rising bollards on George Street? Genius idea Andrew, how did that work out for you then?
And now Lesley Hind’s brainchild, the 20mph limits. The rationale, fewer people die when hit by a car at 20mph. Brilliant, let’s reduce it to 10mph and then even fewer people will be injured, or wrap them in bubblewrap so if they do get hit by one of these hideous cars, then they’ll have a nice soft landing. Or maybe educate people to actually pay attention when they cross the road rather than assuming all drivers are speed freaks.
Or maybe even, and I accept that this is left field and really radical; open up all the roads to let cars drive along them instead of funnelling cars through an ever decreasing number of thoroughfares. Like it used to be, remember?
As I no longer live in Edinburgh I don’t have a vote in the May elections which is a pity because I’d vote for any party that accepted that the car is here to stay and that we don’t all embrace public transport. Even my tree hugging friends (and I do have 2) think the 20mph limit is nuts. I really hope this Council get their comeuppance for once again screwing up the streets of the City
The car is here guys, get used to it